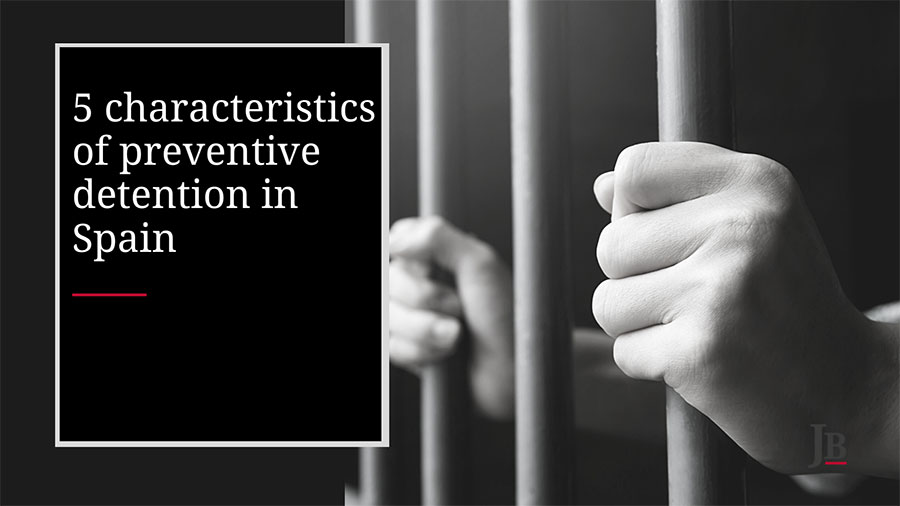 5 characteristics of preventive detention in Spain

To make a consultation with lawyers specializing in pretrial detention,contact our office Jesús Becerra Abogados.

1. What are the legal requirements for preventive detention?

Provisional detention is the most serious precautionary measure provided for by the Spanish legal system, it involves the deprivation of liberty of the person under investigation during the entire or part of the criminal procedure. The art. 502 of the Spanish Criminal Procedure Law establishes that it is an exceptional measure that can only be adopted when it is strictly necessary, and when there is no possibility of imposing less restrictive precautionary measures but liberty deprivation on the person being pursuant to art. 503 of the Spanish Criminal Procedure Law, pre-trial detention could only be ordered if the following requirements are met:

2. What is the legal procedure for the adoption of preventive detention?

Preventive detention is issued by the judge (in the vast majority of cases it is an investigating judge who is the director of the investigation in the Spanish criminal procedure) once a hearing has been held, which must be held as soon as possible. (in a maximum of 72 hours), once the person under investigation has been arrested and brought to justice. At the aforementioned hearing, in the presence of the person under investigation and his defense attorney, the prosecution and the accusing parties (if any) must request the imposition of preventive detention. The defense will have the opportunity to present arguments in favor of the (provisional) non deprivation of liberty of their defendant, or the imposition of less restrictive precautionary measures. A few hours later, the judicial resolution is usually issued, which must contain the reasons and motives why the judge considers that the person under investigation should be placed in preventive detention. This decision may be reviewed at any stage of the procedure at the request of the defense attorney and may be revoked or replaced by the judge who issued it or by the immediate superior court at the request of the defense by filing the corresponding appeals (reform appeal). and appeal).

3. What is the maximum duration of pretrial detention?

Pre-trial detention in certain circumstances could have a maximum term of up to four years. However, the particularities and maximum limits that we will explain below must be observed:

4. Can preventive detention be replaced by other alternative measures?

Yes, as it has stated before,  there are less restrictive measures that, according to the jurisprudence of the ECHR, should be the first option to be applied by legal operators.

The most used alternative measures are the following:

5. Can the fulfillment and execution of alternative measures to pre-trial detention imposed by a judge in Spain be carried out in another member state of the European Union?

In the increasingly close framework of judicial cooperation between member countries of the European Union, there is a full possibility, in accordance with European regulations (which in Spain has been transposed by Law 23/2014 of November 20), that restrictive measures of liberty that are substitutes for pre-trial detention may be served in the territory of another state of the European Union.

Thus, art. 110 of the aforementioned Law 23/2014 of November 20, on mutual recognition of criminal decisions in the European Union, establishes:

“1. The following surveillance measures may be transmitted and executed in another Member State of the European Union or received by the competent Spanish judicial authorities: (…)

The fundamental requirement for this process to be initiated is, as established in art. 112 of the same law is, precisely, that the investigated habitually resides in the Country member where these measures are intended to be executed. In other words, if the person under investigation is a German or Austrian citizen who was prohibited by a judicial measure from leaving Spanish territory and/or prohibited from approaching the complainant, it is perfectly possible that the procedure can be initiated at the request of his or her defense attorney and that the prosecuted can return to his/her country and comply with these restrictive measures there.

To find out more details about the preventive detention in Spain, or to make a consultation with lawyers specializing in pretrial detention, contact our office Jesús Becerra Abogados.

We use our own and third-party cookies to improve our services by analyzing your browsing habits, as well as to collect data on how users interact with our website. If you want to know more about its purpose, as well as modify its configuration, you can visit our Cookies Use PolicyAcceptCookies Policy