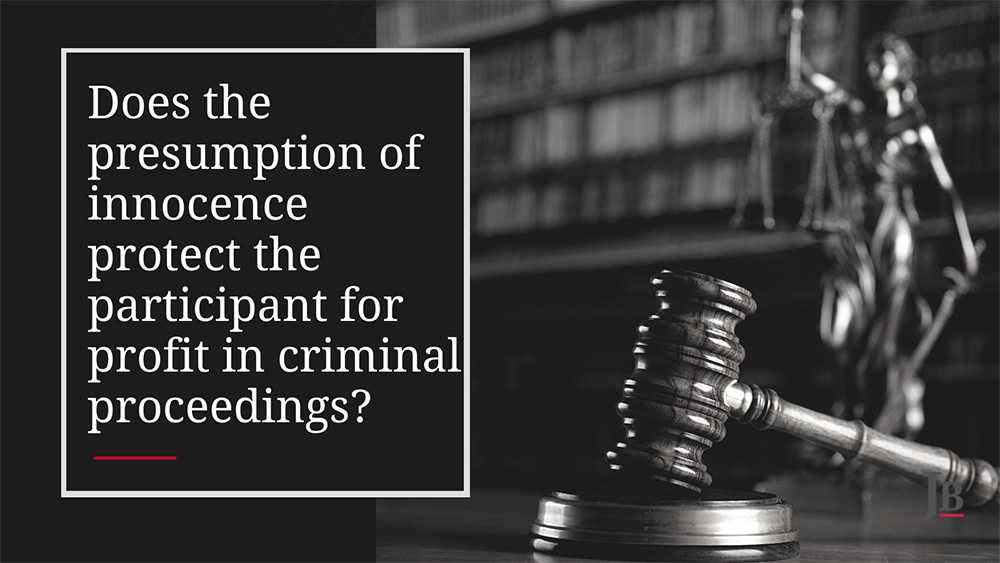 Is the participant for profit in the criminal process protected by the presumption of innocence according to the Supreme Court?

The jurisprudence of the Supreme Court answers this question in the negative. Thus, for example, STS no. 1006/2021 of December 17 , states that -with regard to the so-called profit-seeking participant-, we are exempt from criminal responsibility and “…in the strict sphere of civil liability.”

The aforementioned resolution prosecutes an alleged misappropriation of art. 253 of the Criminal Code (although it seems to us rather an unfair administration of art. 252.1 CP): the agent of a professional soccer player, entrusted with the management of his business, made a series of unauthorized transfers and withdrawals of cash to the detriment of his estate. During the commission of these acts, the subject in question was married in community of property with Mrs. X.

The sentence says: “…both [husband and wife] shared activity and were participants in the society (…) [Mrs.] being perfectly informed of her husband’s activities and his level of income, knowing that it did not allow them the standard of living and the acquisition of real estate carried out during that period, especially the house acquired by she and her husband (…), since she knew very well that her family finances did not have sufficient resources to have made that purchase in cash, without any evidence that she had any participation in making the cash provisions made by the defendant, even if he took advantage of its result.

In the FIFTH Legal Basis of the resolution, it is explained in the first place that the figure of the participant for profit, provided for in art. 122 of the Criminal Code (which expressly says: “He who for profit has participated in the effects of a crime, is obliged to the restitution of the thing or compensation for the damage up to the amount of his participation”), constitutes a form of attribution of “joint and several” civil liability to the criminal liability of the accused. It consists of the gratuitous benefit of the profits derived from the crime by a person who cannot be attributed authorship or participation in the commission of the punishable act.

Thus, while participation for profit is a purely civil accusation, says the Court – based mainly on STS 277/2018 of June 8 and the ECHR of September 24, 2013 (Sardón Alvira v. Spain)–, that his evidence is not governed by the presumption of innocence and therefore, to determine his existence, the value standard “beyond all reasonable doubt” should not be required.

In the particular case, the judgment determines this degree of civil liability of the defendant’s wife in the acquisition of a home for the marital estate “…for which they paid in cash and without the need for financing…” an amount that is close to180,000.00 Euros, “…sum at which her responsibility will be specified…”

In this sense, the judgment maintains that since the presumption of innocence does not apply in the evaluation of the evidence with respect to the non-profit participant, the in dubio pro reo criterion cannot be applied. The doubt about the certainty of the proven facts, therefore, is not in favor of the accused. For this, the content of the SSTS 302/2017, of April 27, is quoted verbatim; 639/2017, of September 28 and 277/2018, of June 8: “…The presumption of innocence does not extend to the facts that give rise to civil liability. In that territory it has to be to other standards of proof: the most likely. The doubts —if there were any, which do not seem to exist— do not necessarily have to be resolved in favor of the alleged civil liability.” (emphasis ours).

It would seem, finally, although we cannot know for sure given the laconic nature of the underlined expression, that in this regard the TS points out that the evaluative criterion to consider a fact proven in these cases is that of probability: that is to say , after assessing all the evidence, it would suffice to consider a fact proven through the existence of a higher possibility that it is true than false (Nieva Fenoll, 2010, p. 86). This criterion, like that of the phrase “beyond all reasonable doubt” comes, as is known, from the countries of the so-called common law, characterized by producing concepts of great clarity and simplicity.

This is due to the prevalence of the jury in said systems: expressions must be conceived that serve as a guide (in this case for the evaluation of the evidence) for people who do not have legal training and that allow them intuitively to have a basis to consider when a fact should be or not be considered proven (Nieva Fenoll, 2010, p. 85 s.). Thus, for example, in the well-known manual Keane & McKeown, The Modern Law of Evidence, 12th ed., 2018, p. 112 s., citing Miller v. Minister of Pensions that maintains: “It must carry a reasonable degree of probability, but not so high as is required in a criminal case. If the evidence is such that the court can say: ‘we think it more likely than not’, the burden is discharged, but if the probabilities are equal it is not”.