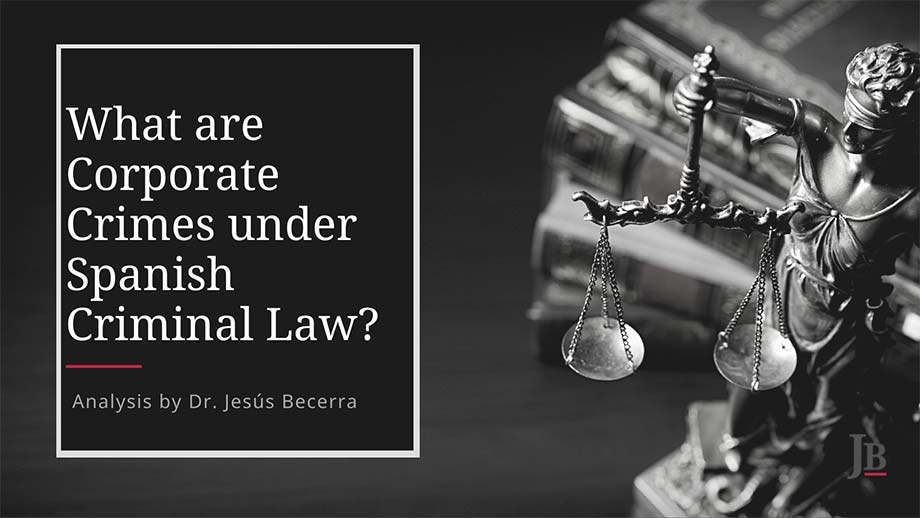 What are Corporate Crimes under Spanish Criminal Law?

Corporate crimes are criminal figures intended to sanction typified behaviors of what is known as business criminality: the company is essentially protected from attacks against its own interests. They were introduced in the Spanish Penal Code of 1995 with the following purposes:

What are corporate crimes under Spanish Criminal Law?

What is the scope of application of corporate crimes?

Where are corporate crimes regulated?

What figure or position within the company could commit these crimes?

What is the necessary requirement to criminally prosecute a corporate crime?

What are corporate crimes?

What is the scope of application of corporate crimes?

For the purposes of the Spanish regulation on corporate crime, are considered companies: the financial or credit entities, commercial companies, cooperatives, savings banks, mutual societies, foundations and entities of a similar nature. The regulation of art. 297 of the Criminal Code also includes a very general closing clause by establishing “…any other entity of a similar nature that permanently participates in the market.”

Where are corporate crimes regulated?

Corporate crimes are regulated in art. 290 and subsequent articles of the Penal Code.

What figure or position within the company could commit these crimes?

The crimes of arts. 291 CP (imposition of abusive agreements) and 292 CP (imposition or use of agreements adopted by a fictitious majority), are common crimes: they can be committed by any person linked or not to the company, although generally in most cases are attributable to the shareholders and/or administrators of the company.

The crimes provided for in arts. 290, 293, 294 of the Criminal Code, can only be committed by the administrators (in fact or in law) of the company, that is, the person (appointed or not by the administrative body) who exercises the functions of direction and management within the company.

What is the necessary requirement to criminally prosecute a corporate crime?

A prior complaint is necessary, as established in art. 296 CP. Therefore, a criminal proceeding to investigate and prosecute the commission of a corporate crime cannot be initiated ex officio by the authorities (investigating judges, prosecutor’s office or judicial police). In these cases, the complaint of the aggrieved person or his legal representative is necessary. Article 296 of the Criminal Code itself establishes, by way of exception, that a complaint will not be necessary if the specific corporate crime affects general interests or interests of a plurality of people.

What are corporate crimes?

Without prejudice to more detailed explanations that we will publish later, we anticipate that, for example:

The art. 291 of the Spanish Criminal Code (CP), sanctions (with a sentence of 6 months to 3 years or a fine of three times the benefit obtained), the so-called abusive agreements: the attack on the patrimonial interests of the minority shareholders. Thus, the alleged defendant in STS no. 172/2010 of March 4: the majority shareholder and administrator of a commercial company unilaterally agrees on the agenda to set up a mortgage loan for the payment of a personal debt totally unrelated to the company, thereby imposing a mortgage burden on the corporate assets for events that do not concern their economic activity.

Moreover, art. 292 CP, punishes with the same penalty harmful agreements adopted by a fictitious majority to the detriment of the company. That is, the manipulation of the process of formation of the corporate will. An example is the case known by SAP Madrid (Section 6) no. 450/2009 of October 23: the defendants acquire their own shares or (treasury) portfolio and thereby seek the corporate majority of the company. Subsequently, they agree through an extraordinary shareholders’ meeting to change the company, which until then had the character of a labor corporation, to a corporation, and also, the dismissal of the administrators. Likewise, they became exclusive joint and several administrators of the company, raising their salaries and in turn forcing the company with loans and lines of credit.

Also, arts. 290, 293 and 294 of the Criminal Code, sanction the falsification of company documents, the denial of certain company rights to partners (right to information, participation in management, etc.) and, finally, the obstruction of the activity of management inspection and supervision, respectively.

As a general rule, criminal jurisprudence tends to emphasize that with respect to these crimes, particularly more serious attacks or behaviors are usually sanctioned in order to try to distinguish criminal relevance from mere commercial illicit acts. Knowing these criteria is of vital importance, since on many occasions —before turning to the legal institution in charge of criminal prosecution—, it is preferable to make claims to the courts and tribunals with commercial jurisdiction.